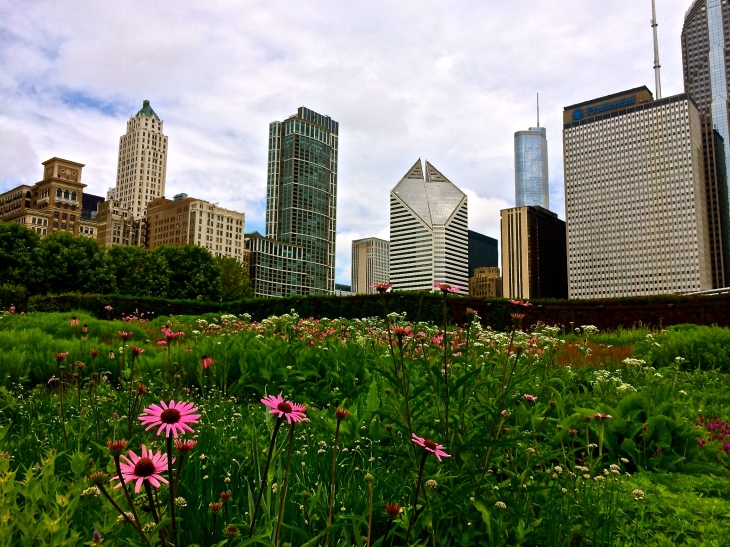 Now I’m seated comfortably at the cafe of a Barnes & Noble. This place has a library vibe to it—the tables and chairs, the people with their books and laptops. And the relative silence. I like this place.

I think I like Chicago more than the Big Apple. There are fewer people. It’s urban but with more soul. I was admiring the flowers at the park earlier and thought, “Somebody upped the filter!” The flowers were beautiful, even in their imperfection. They stood there in the foreground, swaying with the wind, in stark contrast to the mighty, unmoving skyscrapers.

The train ride into the city was painless. Turns out my hotel is conveniently linked to the train station. Onboard the Blue Line, I listened to my Spotify playlist. Natasha Bedingfield’s “Unwritten” made me smile. Today is where your book begins; the rest is still unwritten. It was an apt soundtrack for this short exploration of new things.

Then John Lennon’s “Imagine” followed, and that too was apt as the train carried people from many ethnicities. The black woman in front of me with one earbud dangling. The white man in the orange shirt who had movie-star hair and who misted his aviators with his breath. The two middle-aged men in animated conversation and who were almost mirror images of each other—plaid shirt and khakis. I looked around searching for an Asian person to complete the international picture in my head. Then I realized that I was the Asian representation in this car!

Imagine all the people.

I took Daphne on a FaceTime date at the Millennium Park. We admired the Cloud (which should really be called the Bean). I am looking forward to when we can travel overseas together. My hand ached for her hand. Several times I caught myself wanting to turn to my side to make a comment about a flower, a sculpture, or how blue the sky is….

I picked a leaf which I would press in a book to bring home to her.

I’m not really good at being a tourist, I get tired easily. I vacillate between spontaneity and anxious scheduling. I want to try new things but find myself worrying about awkward situations, getting lost, or looking out of place. Each time I speak to people, I rehearse the lines in my mind, hoping to sound as local as possible.

Earlier, while I was walking, I listened to the soundtrack of “Chicago” the musicale. I smiled. It was fun experiencing you —”and all that jazz”— again, Chicago.

Excerpted from a sparse travel journal written during a recent trip to the US. Every time I leave for an overseas trip, I resolve to journal religiously. And then I come home only to chide myself for not having journaled more; sometimes not at all. Given the chance, I hope to do much better in succeeding trips.